Pulumi is a SDK that can be used to describe an entire application stack using modern programming languages and deploy that stack to multiple cloud providers. This is an exciting new approach to infrastructure as code that can help development teams collaborate more effectively. If you've ever used a product like Terraform, Packer or CloudFoundry you may appreciate being able to use the same language as your application code to describe and deploy the infrastructure. In today's post, I'll detail an example of deploying common components for a web application using Pulumi, C# and Typescript.

Infrastructure as Code (IaC) is widely regarded as essential to any DevOps practice. It brings the promise of repeatable, predictable deployments for new projects and streamlined scaling for existing apps. Seven years ago, I can remember racking and stacking a server, manually installing software on it, applying OS and security configurations and then spending weeks going back and forth with the application team to get an app deployed and functioning. When it was all said and done, some steps were automated, fewer were accurately documented, and pretty much all were repeated next time. Times have changed.

For this post, I'll be deploying a set of servers in Azure that scales up and down based on load, a layer-7 load balancer that distributes traffic to them, and separate public and private subnets. The complete source for the stack is available on GitHub I will also automate the installation of some basic OS components to get the web servers up and running. Here's a crude diagram of the environment to be created: 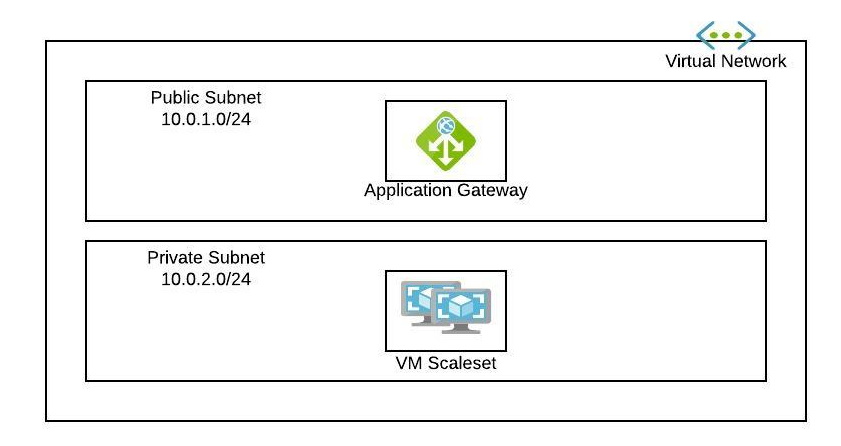 This is a common setup that you might see for an ASP.NET application. Even the IaC approach itself is fairly common, in fact I've deployed a similar stack using Terraform with relative ease. Terraform code for this type of stack would look something like this:

This is simple enough, but it does require an understanding of Terraform's domain specific language. Not a problem for a DevOps team, but as we start to see DevOps staff become integrated into other teams there a some serious productivity gains to be had from everyone working in the same language. Just think of all the extra PR reviewers that could be available to you! That's where Pulumi comes in - as an SDK, it can be used from a number of languages:

Installing Pulumi is easy - I'm using Ubuntu on Windows with WSL, so I just open a terminal and run:

I'll be deploying to Azure, and I'm not (yet) using any CI/CD tools so I followed the excellent Azure setup instructions on the Pulumi website to configure my project for Service Principal Authentication. 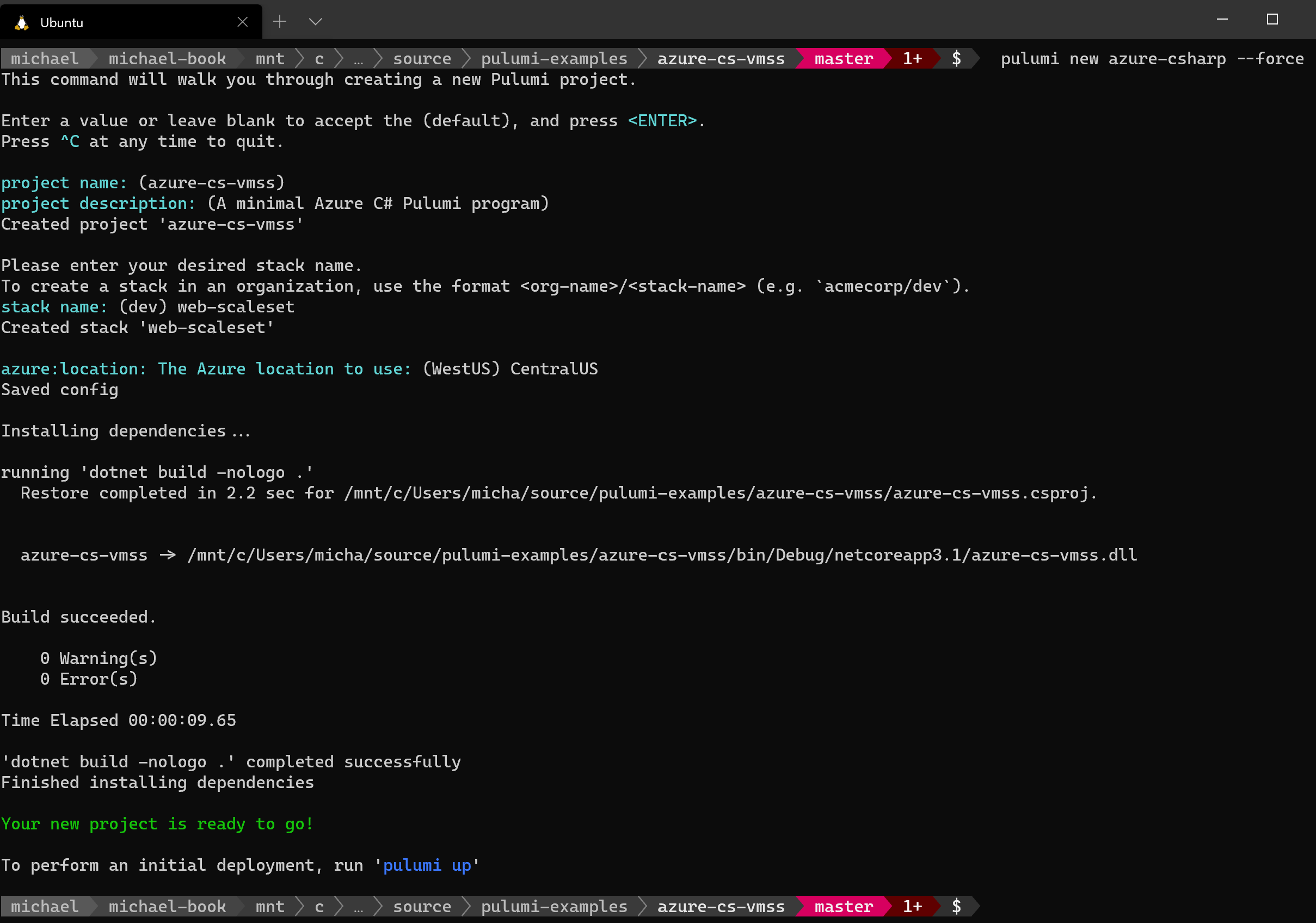 Now that my project is created and configured to access my Azure subscription, I can start defining resources.

The above Azure setup instructions also provide a great introduction to providing configuration values to the project. This is similar to what you might do with Terraform variables - provide a way to reuse this code as a template for future deployments by supplying different values at runtime. The example above sets these values for the specific Azure environment:

I want to add more configuration settings for things like the region, address ranges, DNS name, and credentials that I will use in my deployment.

Rather than post all of the code for the project here, I'll highlight some of the more important steps and encourage you to review the complete stack in my GitHub repo, and also review the much more complete examples provided by the Pulumi team.

Next, I'll create the VM Scale Set for my web servers. I'm using the Azure VM CustomScript Extension to run a very short command to install IIS. In a typical environment, this would be a much larger script that would be stored elsewhere and downloaded by the extension before running.

Finally, I'll deploy this stack and make sure that everything worked with the following command:

Pulumi will evaluate the project, determine which actions will be taken and then prompt for approval. When the deployment is complete, I get a nice summary screen with confirmation:

From this output I can see the URL given to my application gateway, 'aspnettodo.centralus.cloudapp.azure.com'. Browsing to that confirms that IIS is installed and responding to requests. 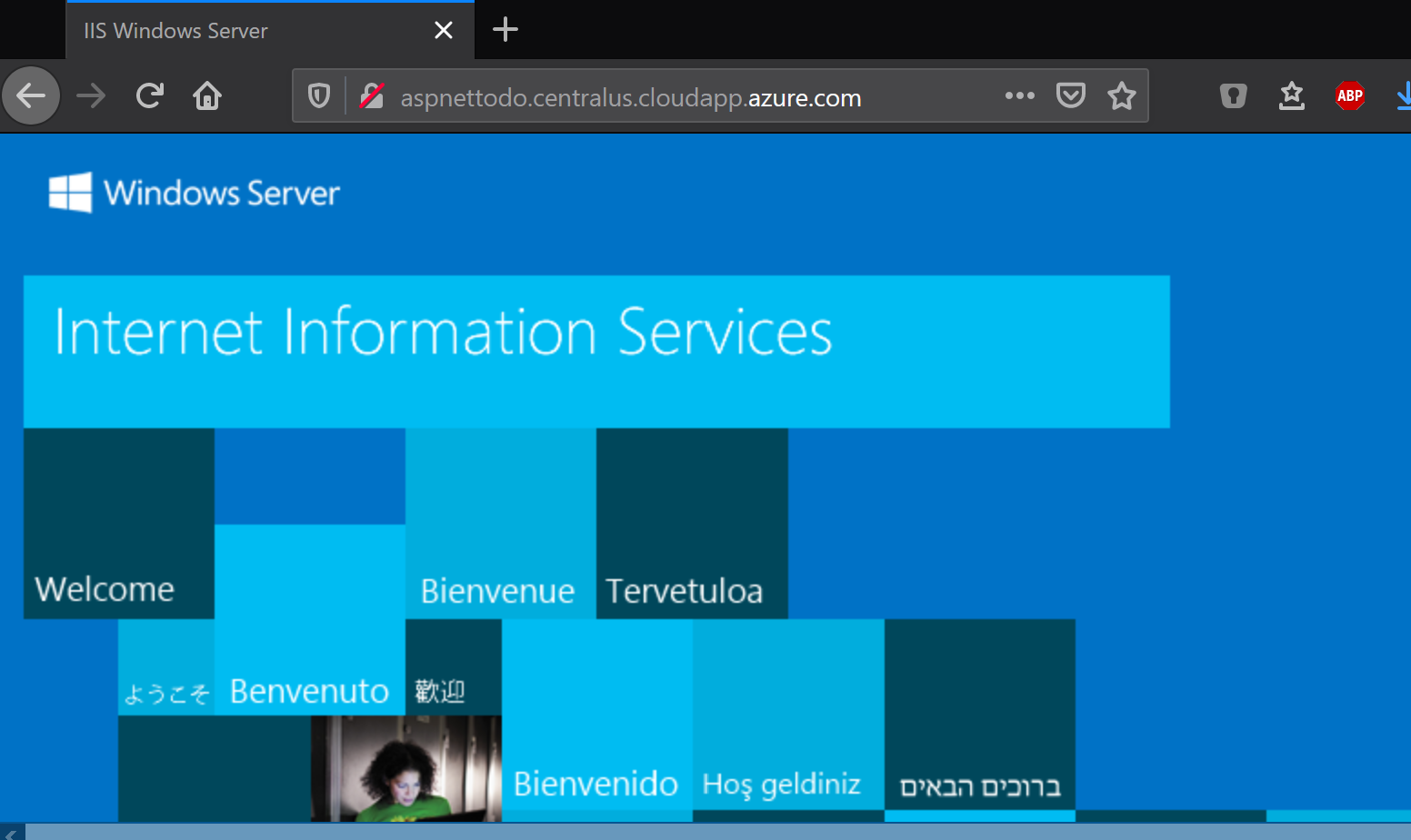 Now that it's complete, I can tear down the entire stack with 'pulumi destroy'. And in just a few minutes I've built, deployed and destroyed a complete web server environment using Pulumi and C#! The IIS Welcome page isn't very interesting though - maybe next time I'll deploy an actual application and try out more capabilities of Pulumi. 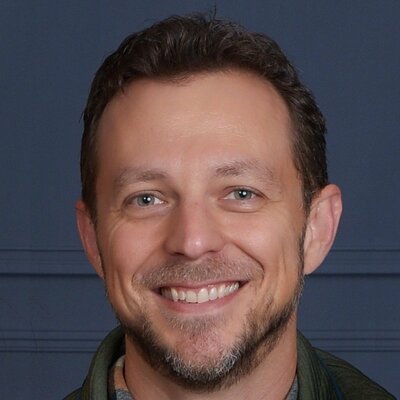