The first step is to install an operating system image on the Pi. There are plenty of tutorials out there for this, so I won't cover it here. The official instructions work just fine.

I'll be deploying MongoDB, which is 64-bit only so I need an OS image with at least a 64-bit kernel. The latest Raspbian image (Buster Lite, 2020-02-13) can support this with a simple option change.

I'm starting fresh, so I'll apply the image and then set a couple of config options before booting up the Pi:

All that's necessary for this is to tell the Pi to load a 64-bit kernel. I'll do that by opening config.txt in the root of the boot partition and adding this line at the bottom:

If this isn't your first boot and you've already got a recent Raspbian image, you can make this change quickly with echo 'arm_64bit=1' >> /boot/config.txt and then rebooting

This isn't strictly necessary, but I don't have a spare monitor around so SSH is a must for me, and I want it to be enabled from first boot. Adding an empty file named 'ssh' (ssh.txt works too) to the root of the boot partition will accomplish this: 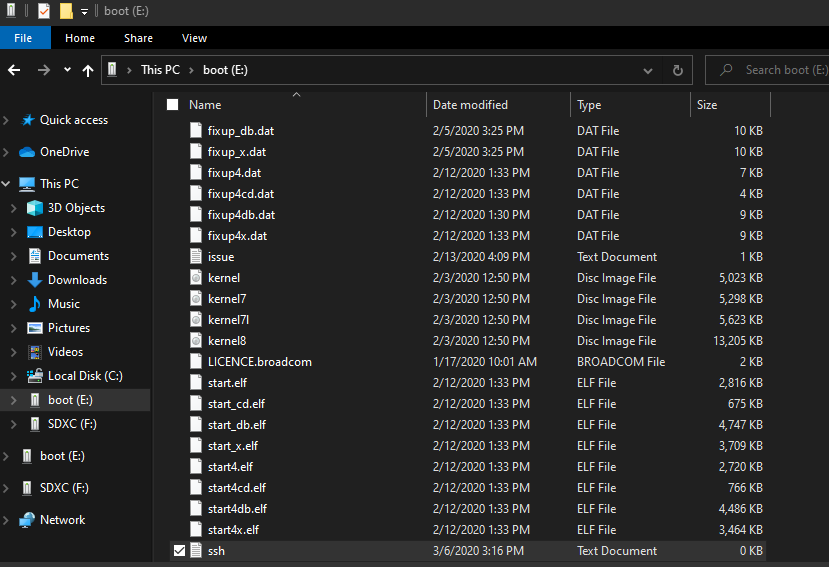 That's it! At this point I have a fresh Raspbian image that will boot up with a 64-bit kernel and have ssh enabled. All I have to do is plug in the SD card and boot it up.

Kubernetes on it's own is too much for my little Raspberry Pi 3. I'm going to use a minimal Kubernetes distribution from Rancher called K3s. The great thing about K3s is that it's designed for small embedded systems but also scales to large clusters. The default configuration replaces etcd with a sqlite database and uses containerd as the container runtime rather than a full install of Docker. This all adds up to a smaller footprint and simpler installation.

The script below will install the version of k3s appropriate for your current kernel. If you haven't switched to a 64-bit kernel yet, now is the time. See the steps above for details, and confirm your current kernel architecture with uname -a , looking for 'aarch64 GNU/Linux'

Installing K3s is easy. I'll just login to the Pi and run -

In a couple of minutes, I'm up and running with a single node Kubernetes cluster.

K3s, unlike a standard Kubernetes install, writes the kubeconfig file to /etc/rancher/k3s/k3s.yaml. Kubectl installed by K3s will automatically use this configuration.

By default, only root will be able to access this kubeconfig meaning you would have to prefix all of your kubectl commands with 'sudo'. You can permit other users to access the file with sudo chmod 644 /etc/rancher/k3s/k3s.yaml

You can also copy /etc/rancher/k3s/k3s.yaml to your local PC, and replace '127.0.0.1' with the IP address of the Pi to manage Kubernetes remotely.

I've defined a minimal configuration for mongodb and saved it as mongo.yaml.

This will deploy a single replica of the latest official mongo image from DockerHub, with some very insecure credentials and no persistent storage. It's really the bare minimum to get the application up and running, which I can do with this command:

I can verify that the pod is up and running with this:

This doesn't expose mongodb on my local network, only to other pods running in the cluster. I could add simple web app to the cluster and use mongo as the data store. Or I could add a service definition and expose it to apps running elsewhere on the network.

This is a good starting point for a basic deployment in Kubernetes, and K3s is the easiest and fastest Kubernetes install I've seen so far.

A database isn't very useful without persistent storage. I have a Synology NAS on my network that serves storage over iSCSI, so I'll quickly add that to my deployment by adding a volume and mounting it in the pod: